I recently finished the first draft of a book set in Perth which spans three decades from the 1960s to 1980s. Many iconic locations form the back drop of the book. How many do you remember?

Many a trip to the city in my childhood with my Mum or Grandma ended with lunch at the Coles Cafeteria.

Located upstairs in what is now the Target building in the Hay Street Mall, we would mount the steep and narrow escalator to arrive at the large open cafeteria. It will forever be associated with a time when a trip to the city was considered a treat, usually dressed in our best clothes and on our best behaviour.

With no natural light, it seemed somewhat dark but never gloomy to a child who loved the crinkly chips with gravy, pikelets wrapped tightly under plastic wrap or the ubiquitous green jelly with a chocolate frog and swirl of whipped cream.

The first Coles Café opened in the Melbourne store in 1930, taking up an entire floor of the building and seating more than 1,000 people. Its immediate success meant replicas were soon opened across the country. 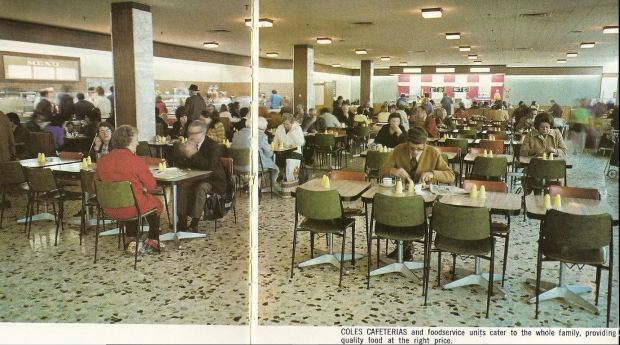 This is actually the Melbourne Coles Cafeteria, but I remember the Perth one looking very similar, even down to the lemon yellow salt and pepper shakers on the table. (Image credit Glen H flikr)

Food was served from long counters around the perimeter of the room, while a great expanse of chairs and tables filled the space in the middle. On arrival, you would collect a tray and slide it down the bench, collecting plates of food from the displays as you went. A glass of icy choc milk from the dispenser was the ultimate treat for us (Mum didn’t like us having the green lime coola).

The Coles Cafeteria in Perth remained open until at least the late 1980s. Apparently you can still see some of the old pink and yellow lino flooring in the back passages of the new Target building, but for most of us, it will simply remain a fond memory of childhood.

What was your favourite treat from the Coles Cafeteria?